I've been planning on a multi-week hike for most of the year. The hike I had planned on was a traverse of the Wind Rivers Range back in the US. However, recent shenanigans resulted in my flight to the US being canceled.

I still wanted to go hiking (and I already had booked 20 consecutive days off from work) so I went into action to scramble and find alternative plans.

I've been here in Norway for some time now, and there's a big attraction I still haven't seen: Trolltunga. I looked up where it was on the map and realized that ... you know, it's not really too far away from where I ended by hike from Bergen. What if I went to see Trolltunga and then hooked up to my previous stopping point and finished that out? It would tie things together nicely, I think!

So I fired up Gaia GPS and started looking at routes and strategies -- being more careful than I was two years ago. It turns out that there's a very large difference between summer routes and winter routes!

Next, I gathered all of my normal gear -- keeping in mind the lesson that I learned (there are no trees on Hardangervidda), so I'll be ground-sleeping on this one. I'm watching a friend's cat, and he kept a close eye on the operation, making sure that nothing was forgotten. 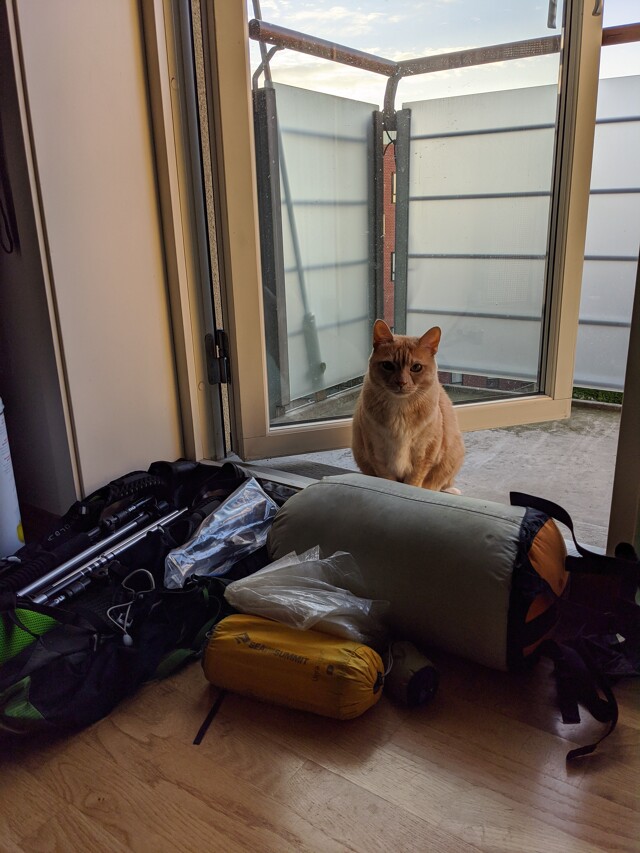 The way this hike was to be structured, I would be starting the hike with a brutal 7-day food carry. There aren't any stores in the middle of the national park! There are some tourist cabins which could/would sell a hungry traveler food at an inflated price, but I was hoping to avoid relying on that -- especially since I didn't know what the rules were in the COVID-19 era!

I went to the store and loaded up on what I thought would be sufficient for that stretch and brought it home to do food-prep later that night. (Sorry, I didn't get any pictures).

Great, I've got everything sorted: gear, food, route. Now it's time to buy the bus ticket and get some sleep!

Uh-oh, the bus tickets are sold out for the next 5 days! I could take a different route (via train), but they want 2300 kr for that, which is crazy to me. Screw it -- how about I just flip the route and walk there instead?

With some minor adjustments, that plan is all sorted out. The only difference is that I won't need basically any of this food that I bought. I'll be leaving home with a very light food load and have to do a resupply before I enter Hardangervidda. Oh well, the good news it that hiking food doesn't really go bad.