Yay, another town day! It's still cloudy but at least it didn't rain last night. But our next town (and shower and laundry!) is less than 20 miles away, so we wasted no time getting up and out. 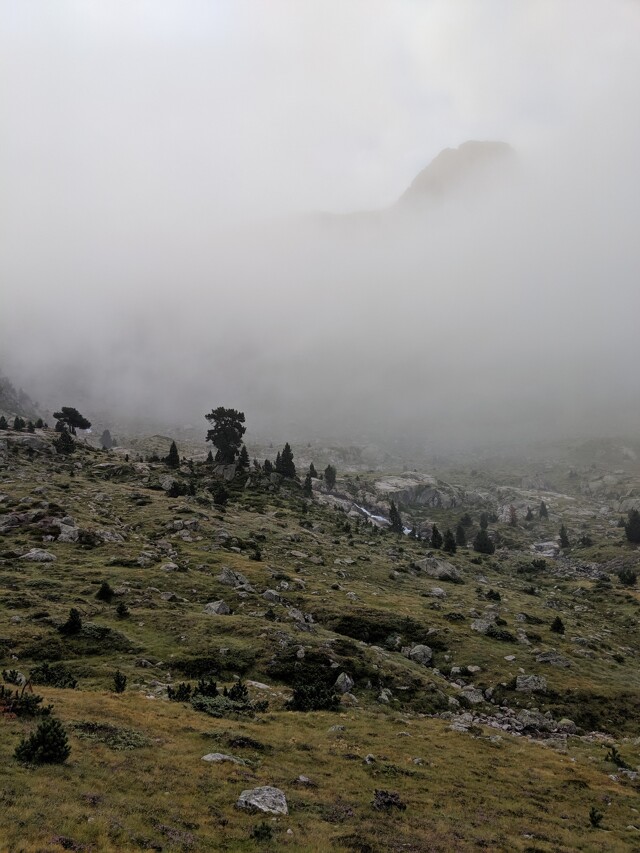 Yikes, another one of those mornings

However, as we climbed (and climbed and climbed) we got above the clouds! Or at least the first layer of them. 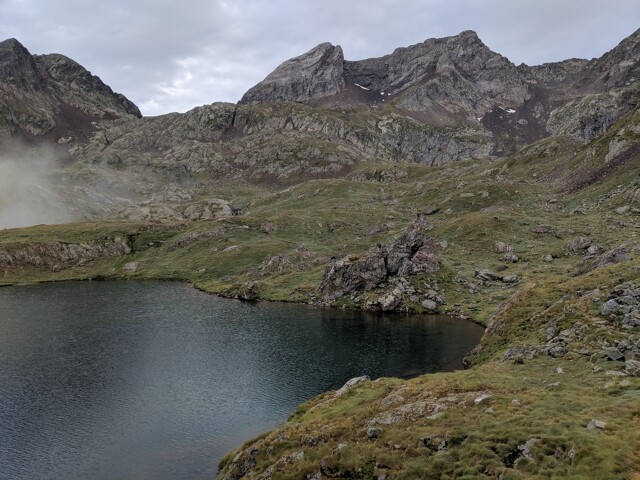 Pretty soon, the clouds were filling in the valleys below us, leading to some dramatic sights 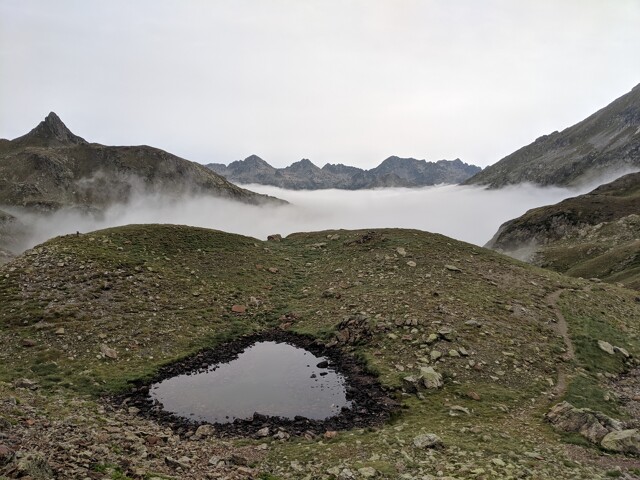 It's always so cool to see them pool like that

Eventually we even got to see a dramatic peak, with a glacier at its foot! It was neat to see, and even cooler to see how many people on the trail were carrying ice axes, presumably to go scramble around on the glacier. 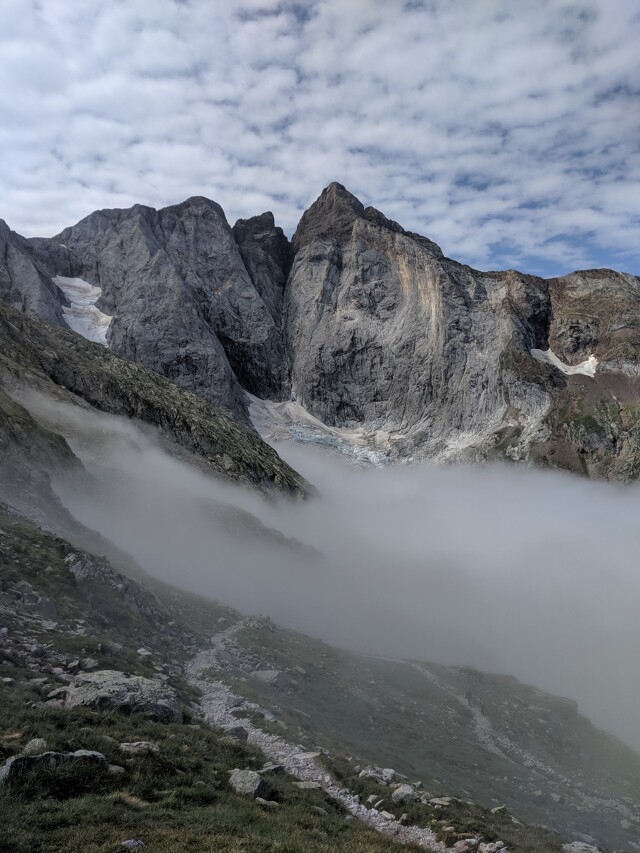 I don't remember the name of the peak 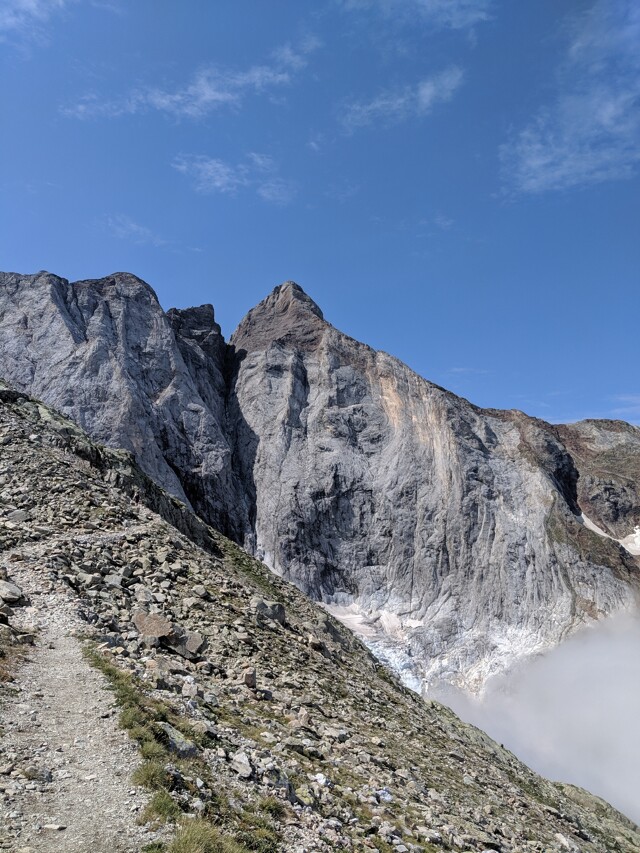 Another picture as we climbed higher and higher

Eventually we crossed our pass and began the long long long descent down into the town of Gavarnie. 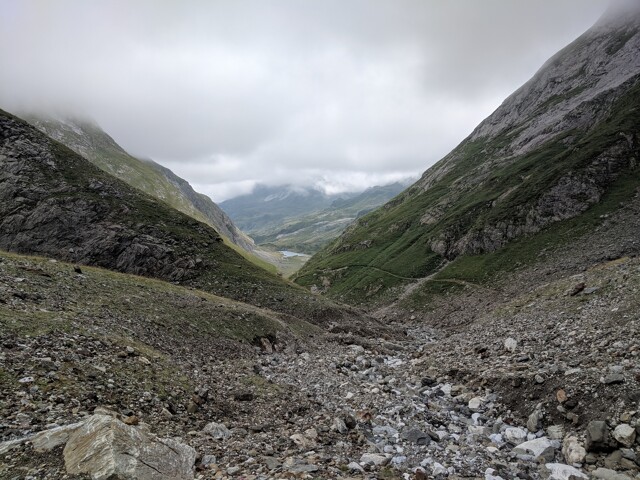 Looking down into the first valley floor

About halfway down, the sun was out, the birds were chirping, the bees were buzzing and I figured "hey, let's use this chance to dry out some things since the sun is better than hang drying in a hotel room".

So I had a pack explosion and ate pretty much all of my remaining food. 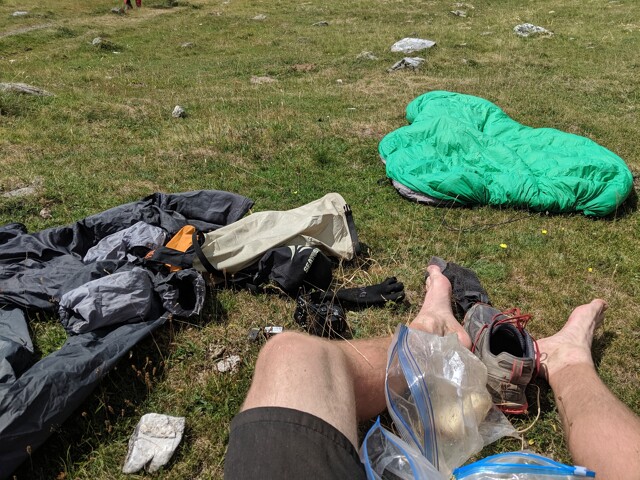 After forty five minutes or so, my gear was all fully dry and happy, so I saddled up and finished the hike down a beautiful valley. Crash had gone on ahead to scope out the hotel situation and he said he would text me with where he was.

When I reached the bottom though, I was crushed: Gavarnie wasn't a town. It was some tourist trap hellhole, with only one room available that night -- for $250 USD!

Crash and I grabbed a sandwich at one of these tourist traps and then headed for the campground. So much for a town stay with laundry and showers. We resupplied at the miniature grocery store they had, grabbing only enough to get us to the next town, some two days away.

Once we got the the campground, we were able to snag the last two tent sites. We wasted no time setting up camp and just calling it a night.

What a disappointment (mainly from my unfounded expectations but still).

(Oh and even the cell service in town was god-awful. No redeeming qualities as far as I'm concerned.) 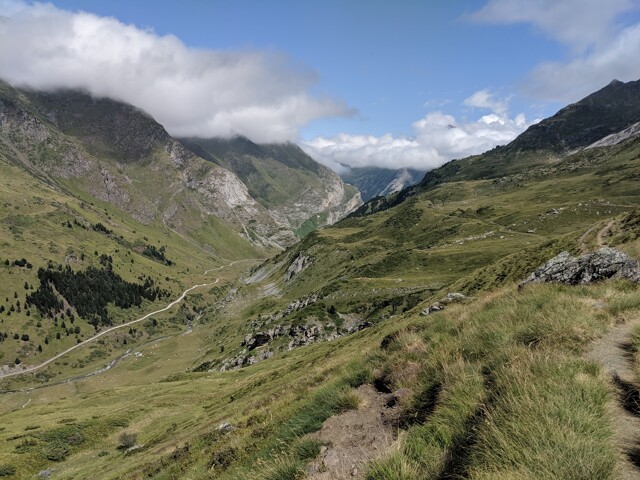 Pretty hike in, though!