Today is the day: Lava day. Lava is the biggest rapid of the Canyon, rated a 9 on the Grand Canyon scale (max of 10). So naturally, this morning everything was rigged securely and nothing was left to chance.

I needed to be up early because I was on breakfast crew, so I got up extra early so that I wouldn't be rushed and stressed. 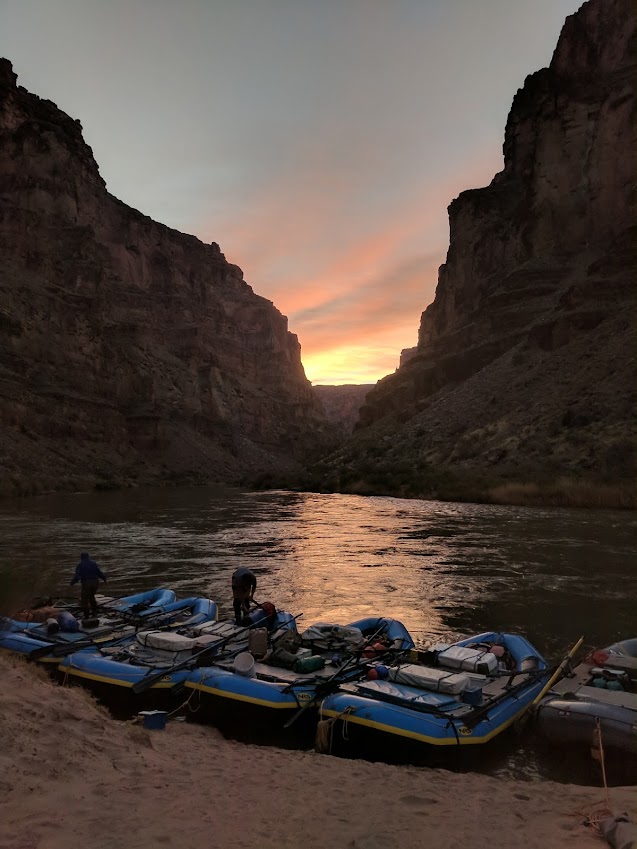 By the time breakfast was served (7:15am), I already had all of my personal gear packed and on the boat. It wasn't rigged yet because Jess was still (understandably) packing up her stuff and getting ready, but at least I was ready and stress-free. This gave me ample time to double-check all of our straps and make sure they were all in good shape and secure and would do their duty.

Then breakfast finished, Jon and I packed up the kitchen, and I joined everyone at the beach for the rigging festivities. 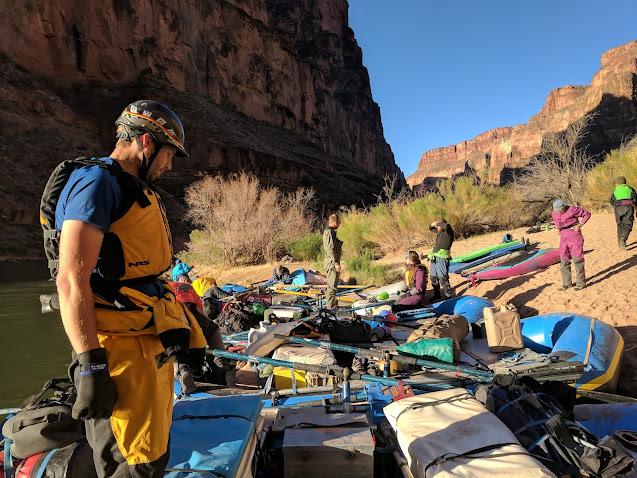 JB checks over his boat

Eventually, we were all satisfied with our respective boats and off we went, down to scout the rapid. 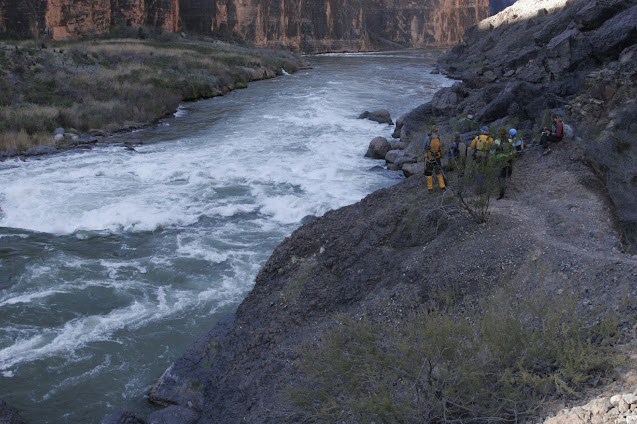 Hiking to the scouting point

We have had pretty high water this trip, which meant the waves (and holes) tended to be bigger, but it also gives you more room to work with. Lava was no exception today -- the line that you needed to hit was wide open and as long as you were pointed straight at the waves (Teed up), you should be fine. 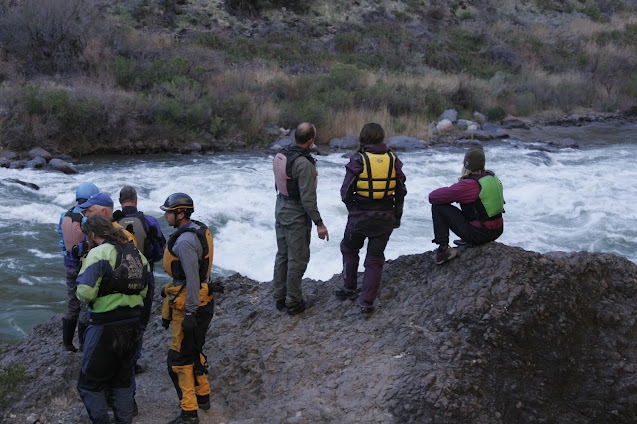 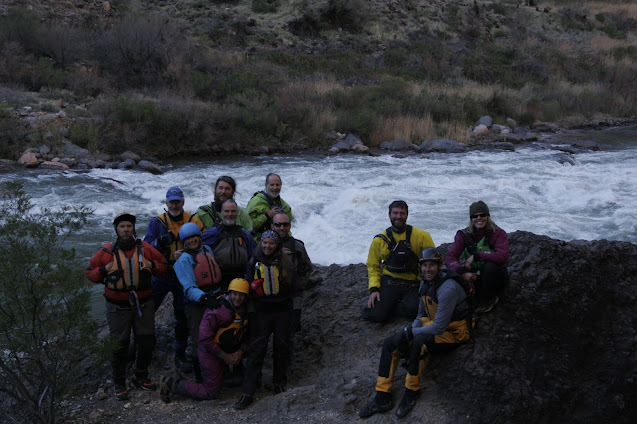 A group shot with the massive hole behind us

I opted to run last because I wanted to hike down to river level and take pictures of everyone going through. So that's what I did, and Jess got the added benefit of being able to watch 6 other boats run the rapid before us. 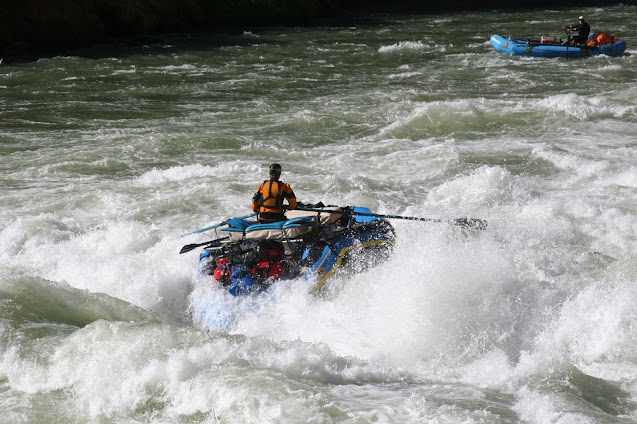 JB's boat flexing like crazy in the Big Kahuna wave 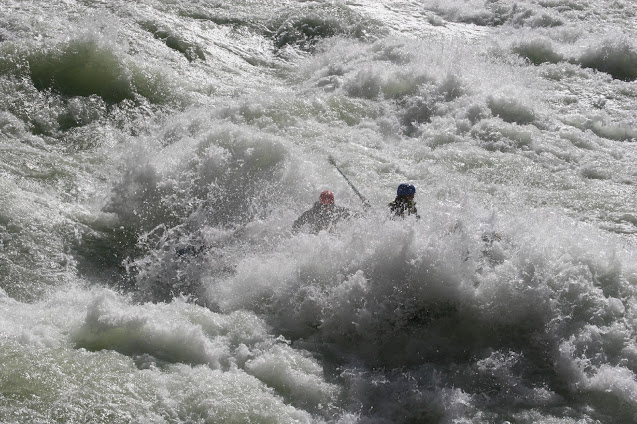 Nick and Amanda getting buried in the V wave

Naturally, this meant that I didn't have pictures of my run, which is really unfortunate because mine was the most exciting one (in my opinion).

I had a great run, and I missed most of the huge waves, but right at the end you crest the biggest wave of the rapid, the Big Kahuna wave. Jess and I got unlucky and right as we started the climb, the wave broke -- not on my boat, but directly into Jess. Or, would have if her reflexes hadn't kicked in and she ducked. This meant that the wall of water went straight over her, and right into me. Which meant I got power-washed straight out the back of the boat. Damn.

I came up underneath the boat twice, knowing what happened and knowing I just needed to wait it out. The third time I came up, I got a quick breath and the buried under another wave. That quick second let me know that we were in the tailwaves though -- I wasn't stuck in a hole or anything (I didn't think I would be, but it was still reassuring). The next time I came up, I was in calmer water and saw that Jess (and the boat) were in an eddy, and she was scrambling for the oars. So I just floated downstream and let Ed row out to catch me.

After that, we all rendezvoused at Tequila Beach for the mandatory celebration -- Lava is not only the biggest rapid of the Canyon, but also the last major one. As such, it calls for some toasts and story-telling before you push back down the river.

After a while, we took our drinks back to the boats, shoved off, and continued to ride the high as we floated to camp. Once at camp, there wasn't a cloud in the sky, so we all relaxed in the sun and just kept BSing late into the evening.

Once the sun went down and we were all around the fire, eating dinner, Gary and Ed put on a small concert for us, singing and playing their guitars for about an hour.

Today was a spectacular day. 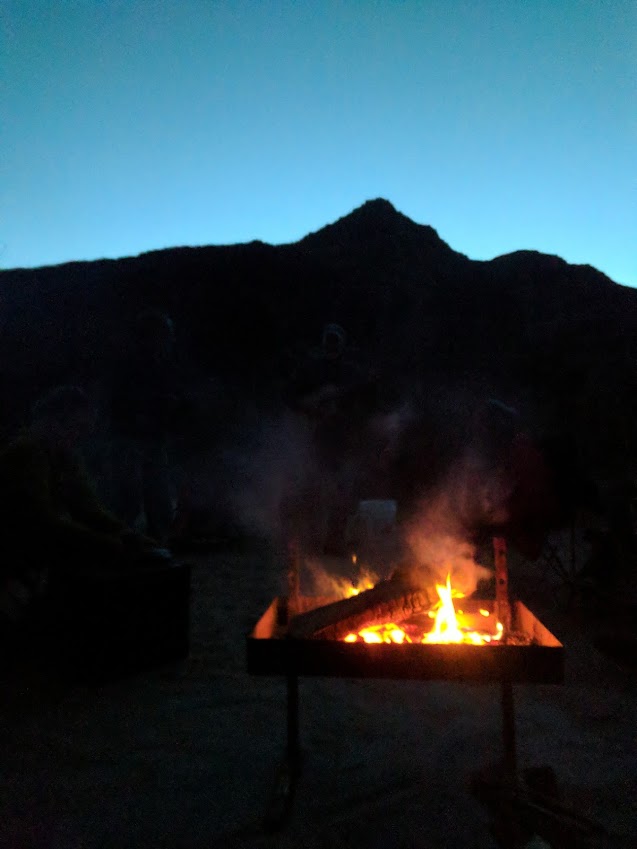 Gary and Ed are behind the fire, but you can't see them 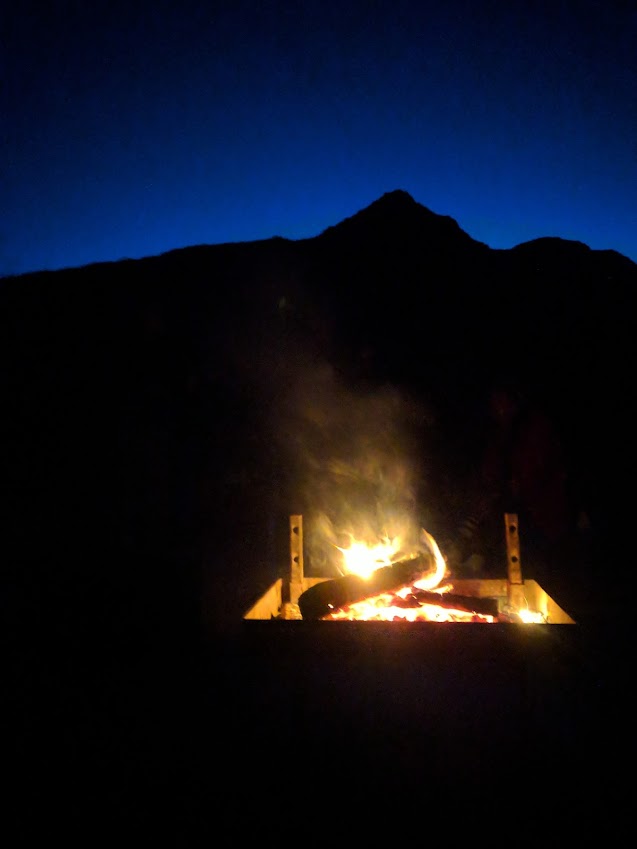 I couldn't decide which picture I liked more, so here are both. 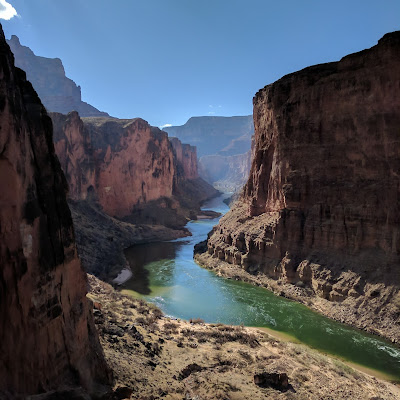