My alarm went off at 4am and I groaned myself awake. Man was I tired! I don't think I had realized just how hard I'd been working until I was a) virtually done and b) not getting a full night sleep. Anyway, onwards! I put on my headlamp and got to steppin'. 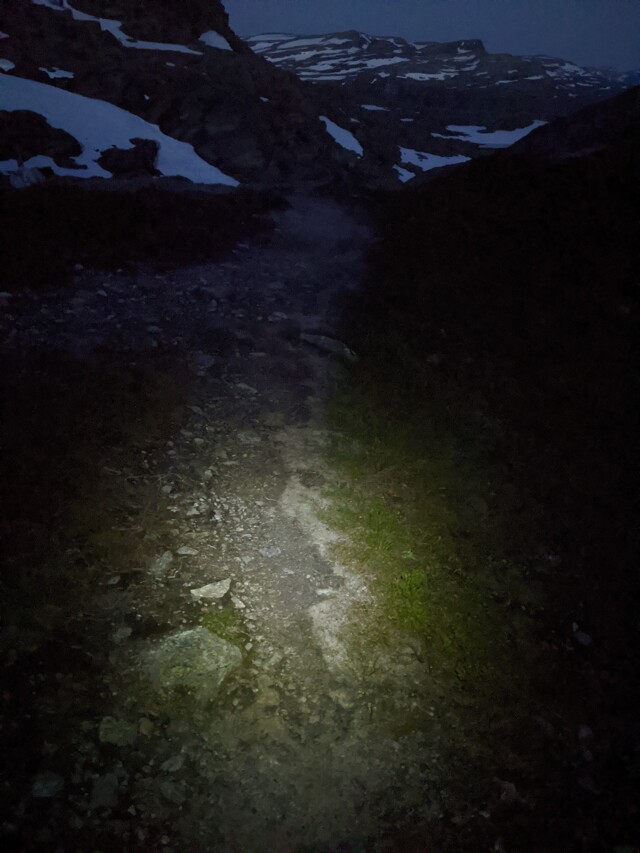 It's been a while since I've done one of these.

In due course, I reached the site of Trolltunga. There were some muggles camping out who were doing similar plans, but they couldn't really be bothered to get up before dawn, so they slumbered on while I went to get my pictures in the stillness. 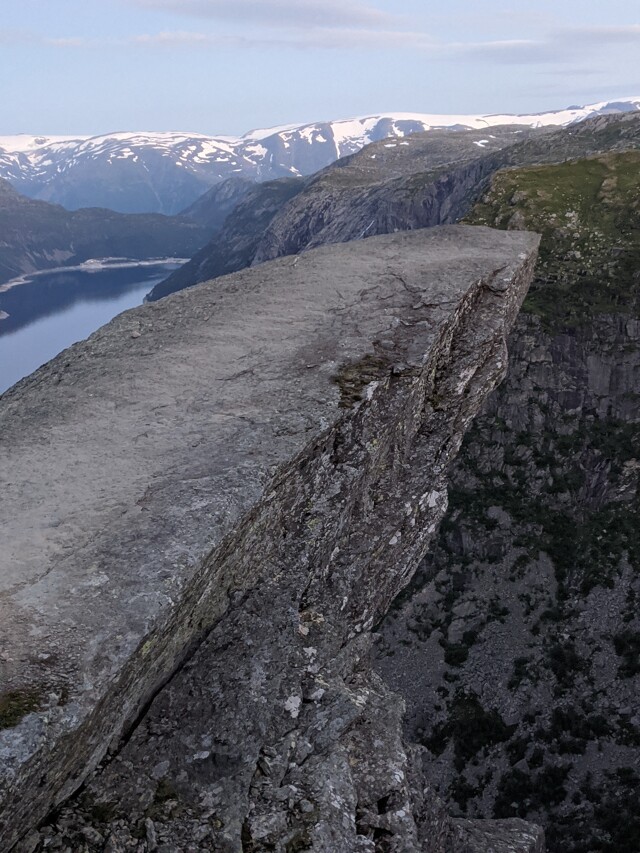 Of course, me being there by myself made it tricky to get pictures. I did one with a self-timer, but I'll tell ya: being on the edge of a 3500+-foot drop doesn't really make you want to run very fast. 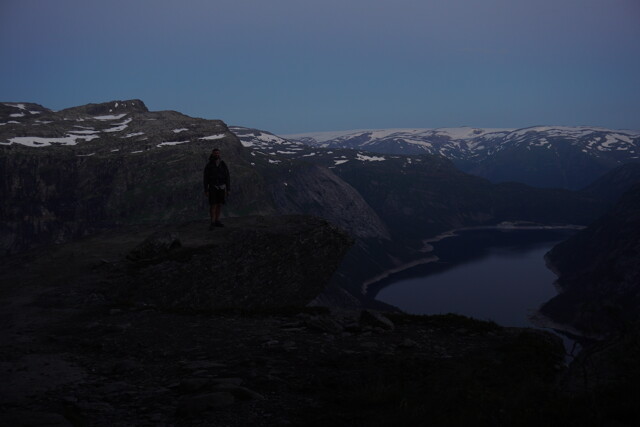 Don't think that I didn't try, though. 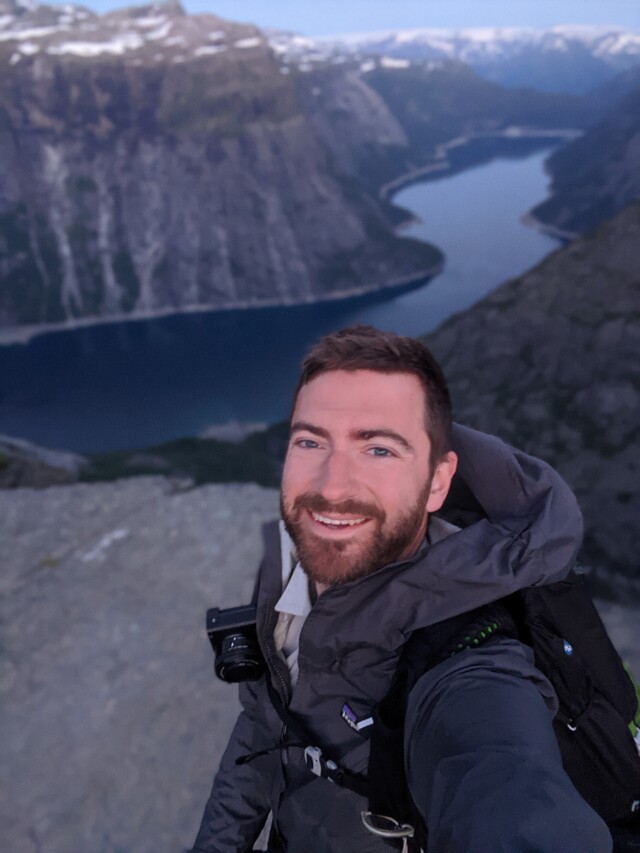 Sometimes the old ways work the best, I suppose

After I took my pictures at Trolltunga, I packed up and kept on hiking. Just a mile or so down (up) the trail is another wonder: Kleiner Preikestolen. I thought Trolltunga was neat, but Kleiner Preikestolen was just unsettling. I belly-crawled to the edge and peeked over and .. the next thing you see are the rocks below, after looking through more than 4,000 feet of empty air. 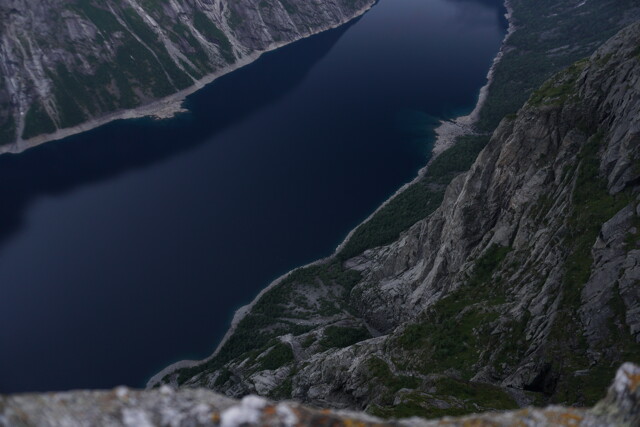 I was so scared I was going to drop my camera

After that, I saddled up one last time and kept hiking. I didn't have plans to hike down the standard tourist route. Instead, I wanted to head the long way around the lake and see the whole valley. If I do it right, I'll drop straight down into Odda -- no bus required! I can never get over the color of these lakes.

I wound up calling it quits a smidge early because the planned route ended with a +400m climb followed by a -1400m descent. Instead, I took my lumps and just did a direct -800m descent. Maybe next time I'll go the other way, when I'm not as tired (and when I have more than 4% battery on my phone).

I eventually wound up back at the traditional start of the trail. The bus was due in an hour, but why would I wait for that when I have a perfectly good thumb? I set up shop with an ice cream cone at the mouth of the parking lot and got a hitch on the third car that went by -- perfect. They were also staying where I was planning on staying (Odda Camping) before I took the bus home in the morning.

However, I learned that Odda Camping is kind of expensive (300kr to set up my own tent? 40kr for a 10-minute shower?!) so instead, I showered, walked into town, bought some dinner, charged my phone while I ate, and went home by:

The night train was terrible simply because -- despite my luxurious shower and new shirt and new socks -- I just smelled so bad. I took off my shoes on the train and just felt horrible for everyone. Oh well though, life goes on. 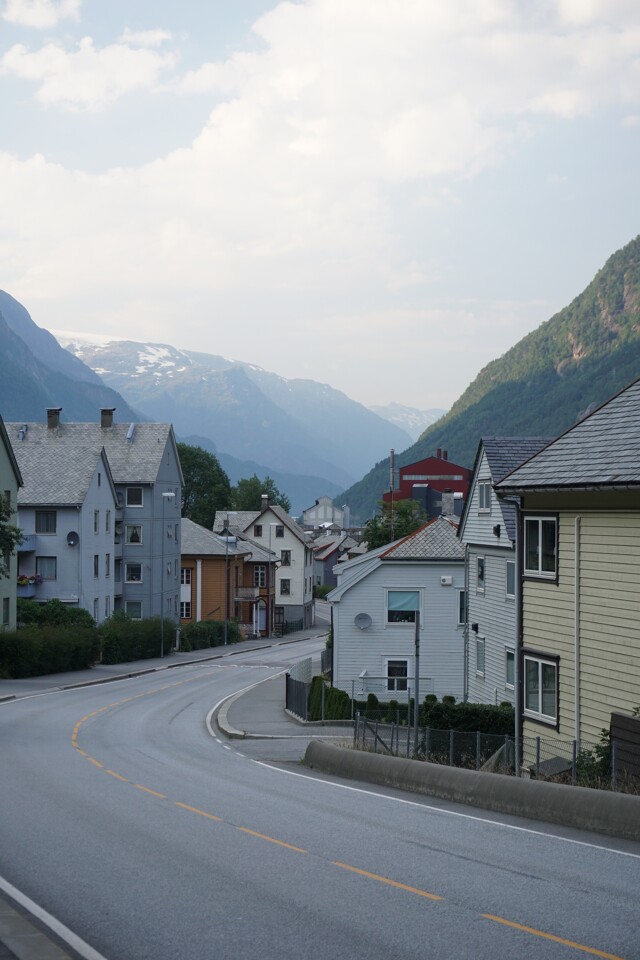