4:30 alarm -- this feels like hiking! (Except we were in a cabin; small difference). After some quick showers, we loaded up the car and drove from Reine back to Leknes to hopefully retrieve Maria's pack. 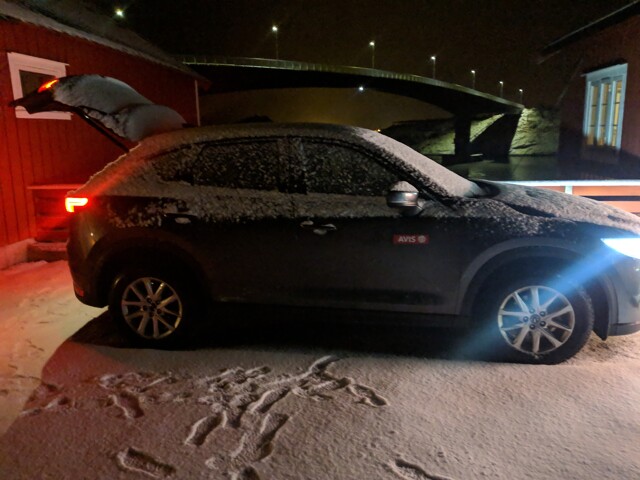 Once we got to the airport, we found out where the bag was (Bodø) and it would be on the 7:30 flight. 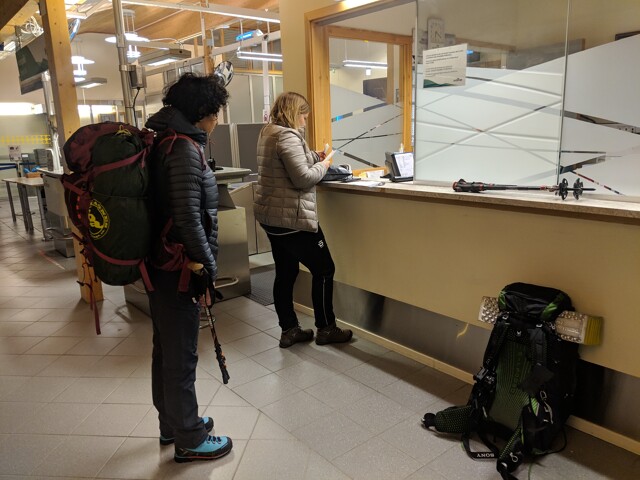 Maria working her Norwegian magic to locate her pack

After hanging out an hour, the pack finally arrived and so we started walking into town for some grub. Unfortunately this whole thing ruined our planned timeline because we would miss the first ferry (8:30). Oh well, time to improvise! 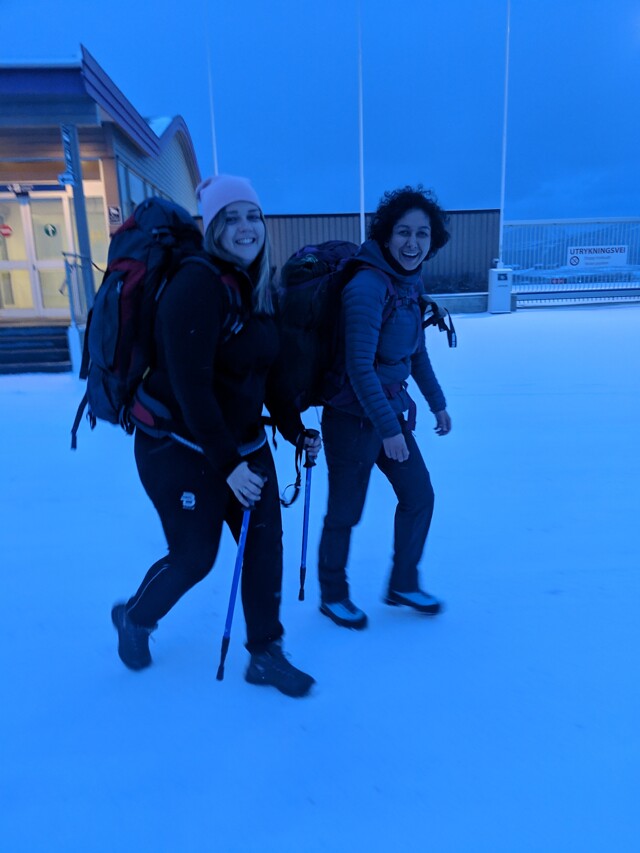 After killing some time at a gas station, we were finally on a bus headed back to Reine so we could catch the 10:15 ferry to Vindstad so we could start our hiking. 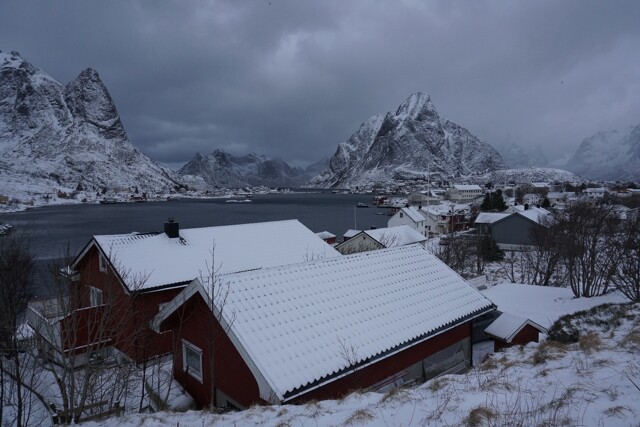 Once we got to the ferry terminal, we learned that on Fridays, the best ferry isn't until 2:15. Damn it. Oh well, let's go hike around because why not! 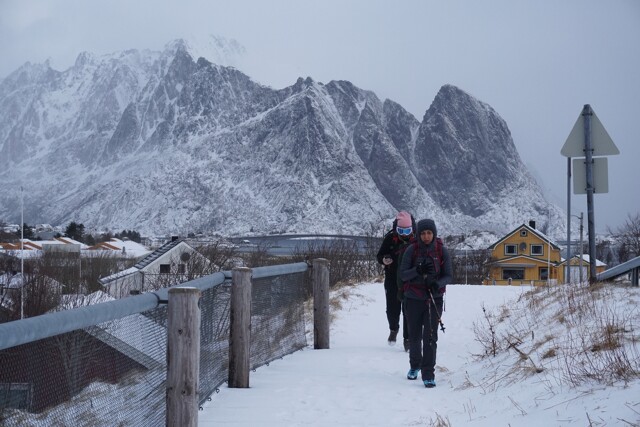 After some hiking around, we headed back to the ferry terminal to catch that day's last ferry (2:15). We struggled to convince him that we only wanted one way tickets, but he eventually sold them to us, and we were off! Looking back as we left Reine

Once we got to Vindstad, we began the actual hike -- right as it started snowing. Big fluffy flakes, which were really pretty, but also really snowy. 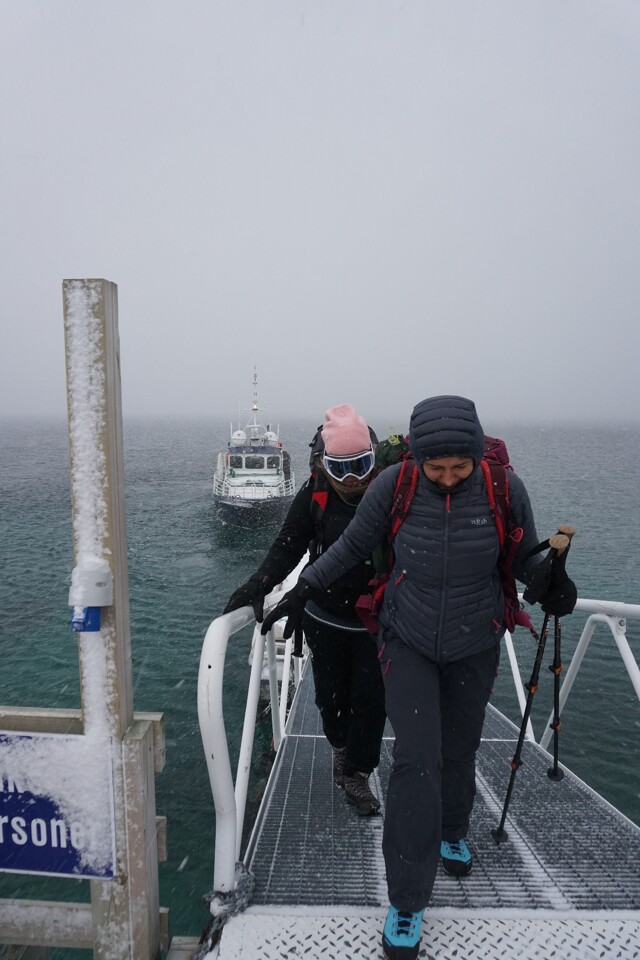 This meant that I didn't take very many pictures. However, it was pretty rough going -- the trail quickly vanished -- both under snow and through rockslides. We eventually picked our way to the far side, arriving into camp around 7pm -- well after the sun had gone down. Thankfully, there was a big flat area for our tents, which would also shelter us if the wind picked up. However, it was the dock of a power plant or something, so it was a concrete floor. This didn't bode well for us (especially me, because my tent is not free-standing). However, we made it work with snow piles and some rocks. 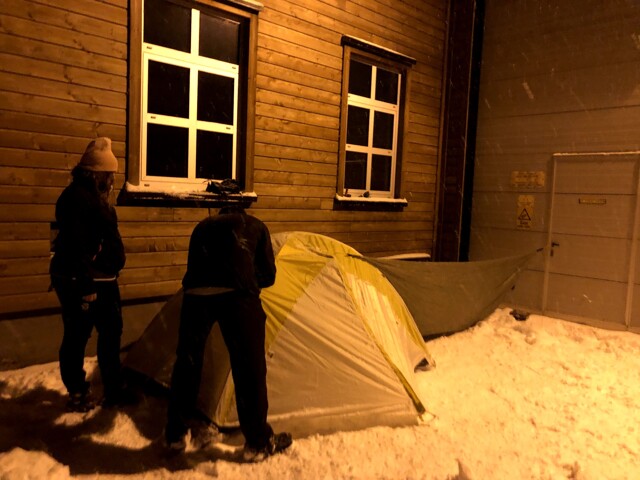 After some jambalaya & cocoa for dinner, we called it a night and headed for our respective sleeping bags at 9pm.