After a surprisingly-chilly night (which included some snowmobilers doing a race on the lake at midnight), we got up when the sun was up. 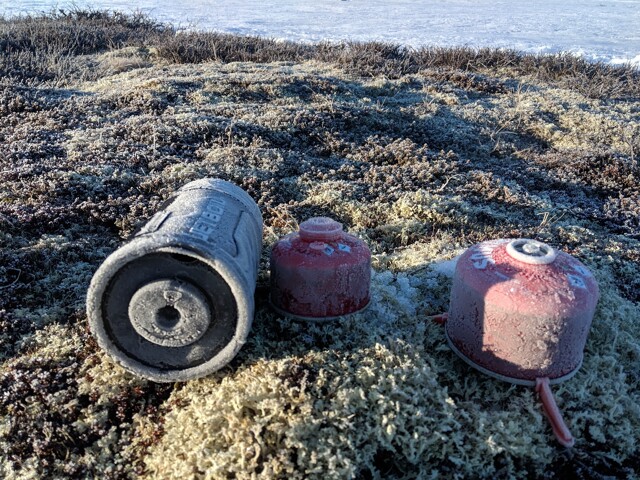 Sleeping by a lake means frost

There wasn't a cloud in the sky when we started the day -- gotta lather up on sunscreen! It's going to be another scorcher. Even worse, the map indicates that we'll have a fair amount of climbing to do today. 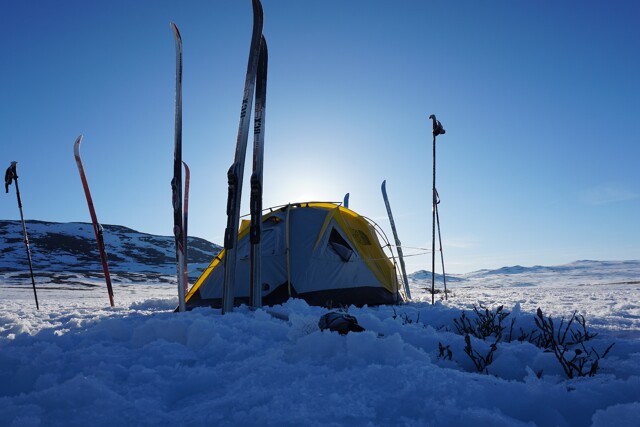 It's hard to get tired of shots like this

Right out of camp, we had a big climb ahead of us. I didn't want to put on my skins (never again), and it was too cold for the wax (the tube was still frozen), so I figured I'd just power through it.

It worked, but man oh man was it tiring! 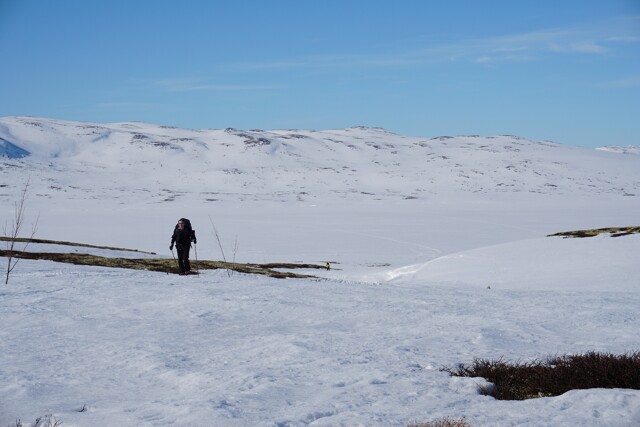 Johannes cresting with H in the background, and the lake far behind/below

At the top, we decided it was time to apply some new wax, now that it was thawed and fluid enough to be applied without making a gigantic mess again (we'd bought a new tube yesterday). 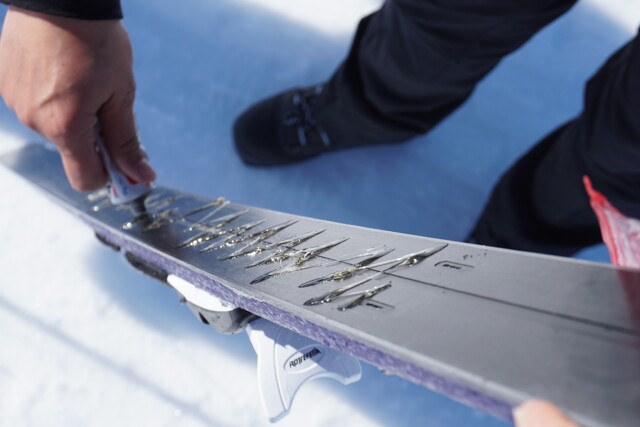 And with that, off we went!

It was a long traverse across some flats (well, up/down/flat/up/down/flat, but nothing major). We eventually arrived at our next big descent. This would take us down to another cabin, and then we'd have to climb right back up immediately afterwards.

So down we went! 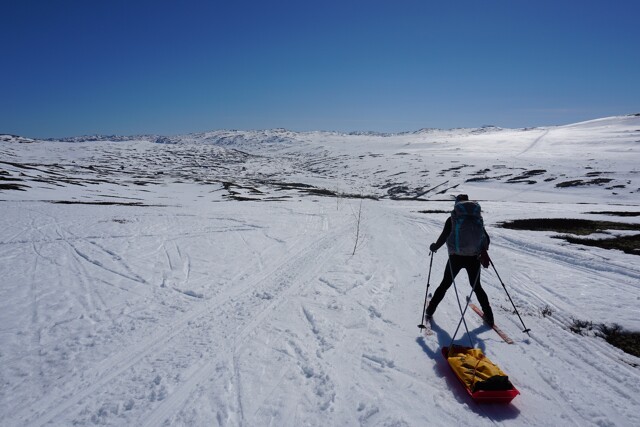 Alex navigating the descent with her pulk in tow

I'm not too proud to admit that I totally biffed it four times on the descent. Fjellski have metal edges (as opposed to normal cross-country skis) but your heels still aren't attached. This means that while you can have some steering abilities, it's easy to get totally out of control.

Nevertheless, we arrived at the cabin in one piece. There was an Easter shindig happening and we got ourselves a free hotdog (and a non-free beer) before heading on our way. 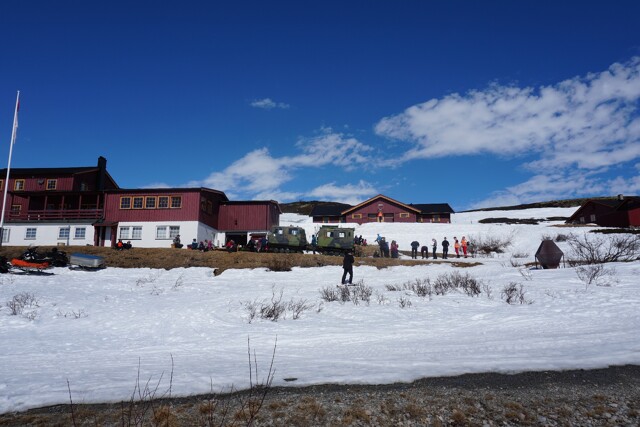 As I mentioned, that big descent was followed by an equally-large ascent. So we got to climbing, with the understanding that we'd have lunch at the top. 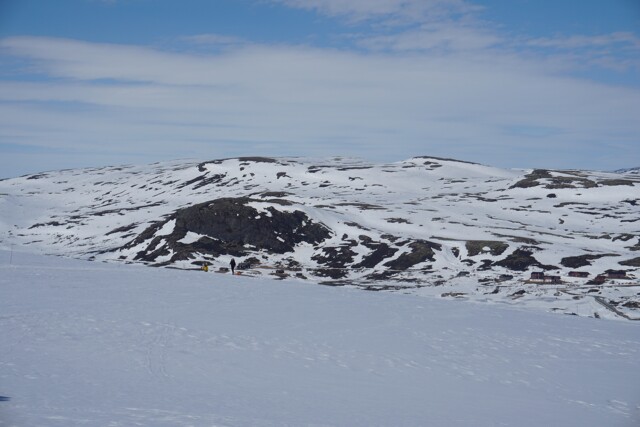 At the top, the sun was out and there was an exposed rocky section which gave me a chance to stretch out my sleeping bag and microwave it in the sun. This quickly dried out the condensation that had built up over the night and made the feathers nice and happy again. It also gave us a good chance to melt some snow because we'd forgotten to refill on water at the cabin.

After our lunch break, we packed up and continued the trek. At this point, a thin layer of clouds set in, which gave us a much-needed break from the sun. It didn't really do much for the heat, but I suspect our skin was happier for it. 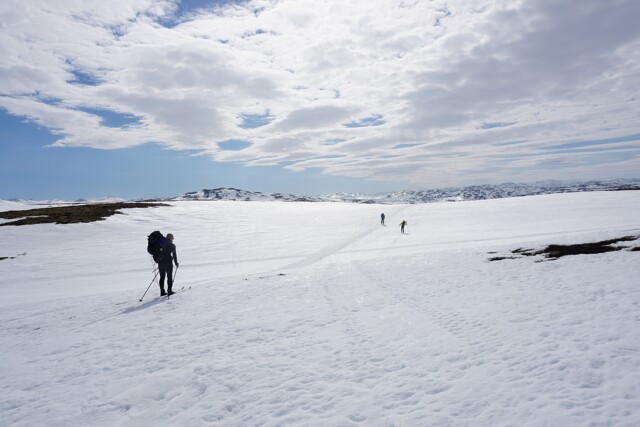 We eventually came to a section that was indicative of just how late in the season Easter was this year: 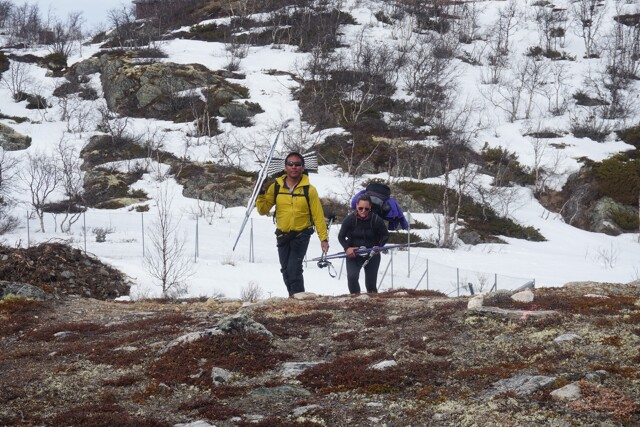 Krissy is loving this

No snow! Ugh. Oh well, it wasn't a long stretch, so we just hiked it, trying to not get our hands too sticky from the wax.

After that, it was another few kilometers to camp. We stopped not just because of energy, but also because of distance -- we only had 11km or so left! If we pushed on, we'd find ourselves in civilization a day early, and no one wanted that.

We chose a decent site, stopped, and set up camp with lots of time left.

And what a camp that was. 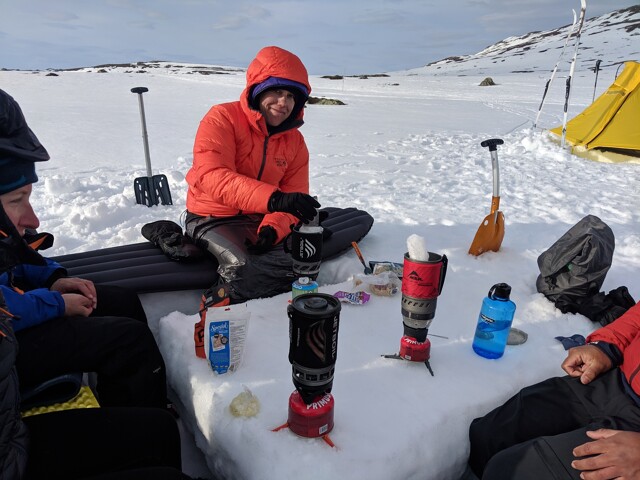 We had some pent-up energy, so we got to digging with the snow shovels and made an awesome table for us all to eat dinner together. We even played some card games!

Then we still had hours until the sun went down, so we got to digging Krissy an awesome sleeping-out pit: recessed to shelter her from the wind, with even deeper areas to prevent the cold air from pooling around her, and a wall to provide further wind protection. 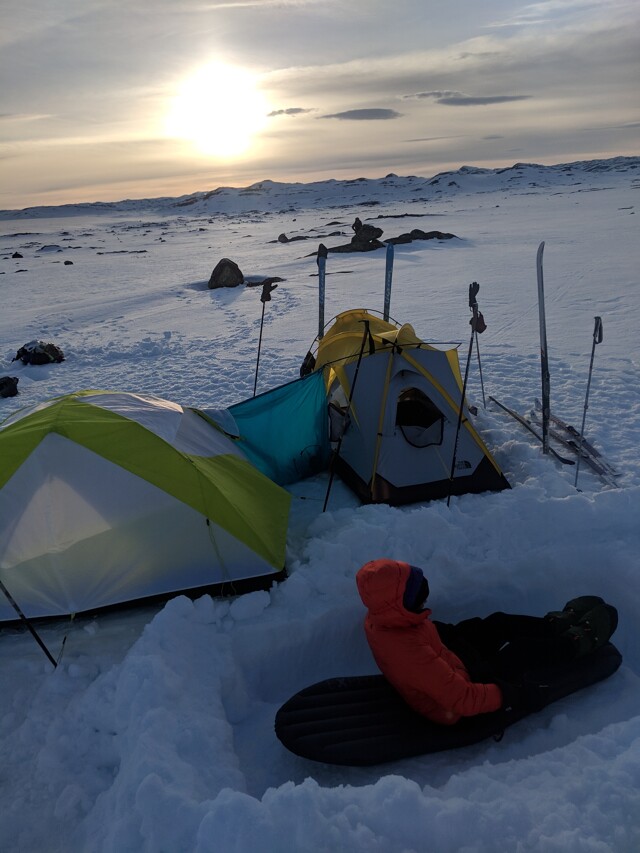 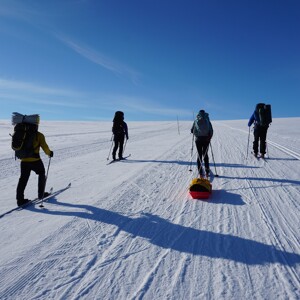