Oof, what a night last night. When we all went to bed, the wind was kicking up, so I finally decided to give in and set up my tent -- this may have been a big mistake. The wind continued to get much, much worse throughout the night, peaking somewhere around 2am.

My tent baffling in the wind was annoying enough (it was noisy but also flattening on top of me with the strong gusts), but the worst part was all of the sand that came with the wind. You might think "but Evan, you had a tent -- how bad could it be?" but what you're failing to understand is just how much sand there was. The wind was carrying sand through every bit of mesh in my tent, and depositing it on the inside. I literally "slept" (I use that word loosely) with a towel on my face because I kept inhaling sand and I could feel it literally piling up on my face.

Thankfully, it started raining around 5am, which wet the sand and kept it on the ground instead of in the air. In the morning, there was a 1mm-thick coating of sand on everything. Blegh. 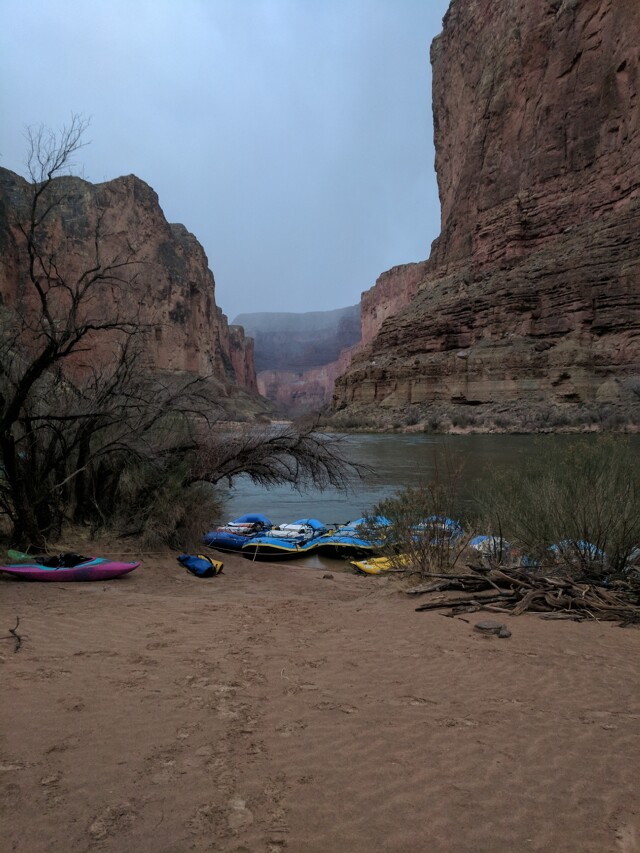 Oh well, no time to cry about it -- we're hiking to the rim today. 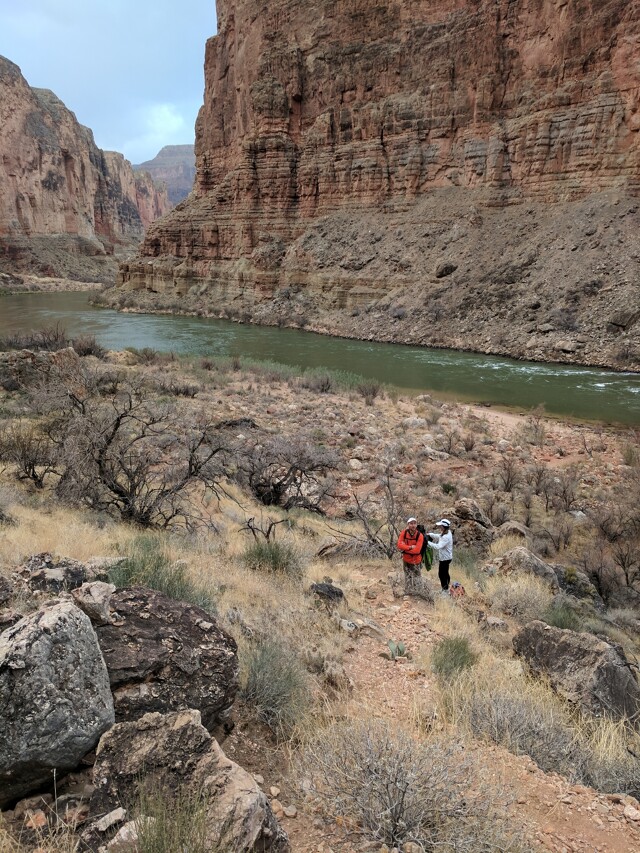 Nick and Amanda do some last-minute gear-fiddling. 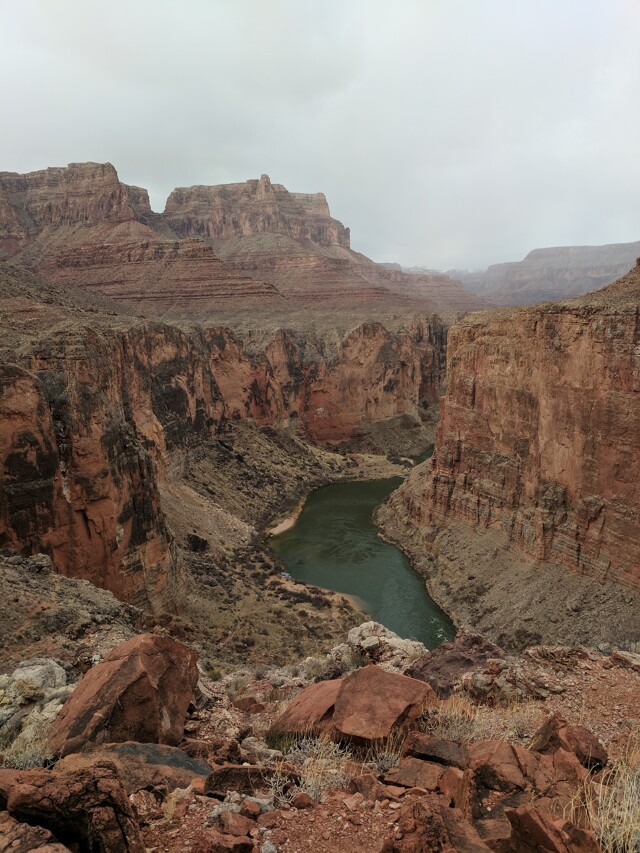 Another look downriver, from about 1000' up.

It was a pretty incredible hike -- since the terrain was so steep, you went through the various layers of rock very quickly. All of the sudden, we had a totally different view of the surroundings than we did from the river. The giant, huge bend of the river that we were camped on suddenly looked like a tight horseshoe. 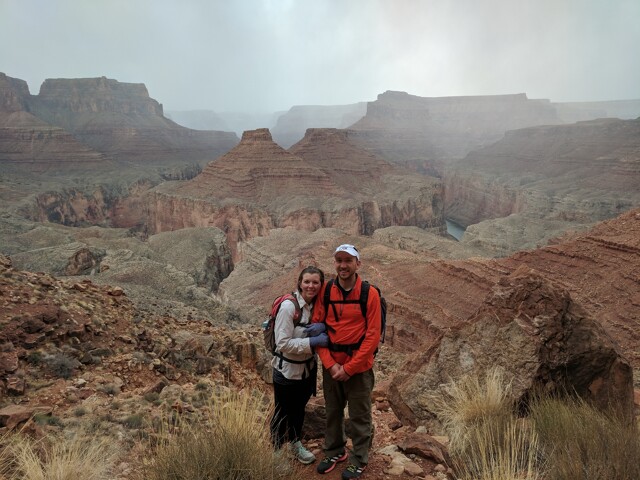 The downside to it being such a steep climb is just that: it's a steep climb. Not really a hike, per se. It wasn't terrible, but it wasn't exactly a walk. There were some exposed sections where you really wouldn't want to fall, which didn't fill us with feelings of safety. 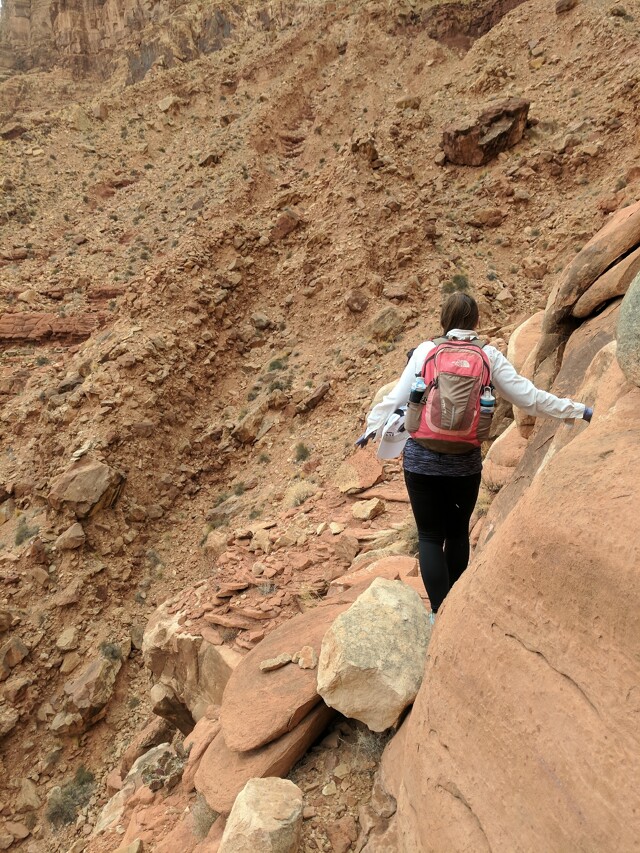 After one of these climbs, we took stock of our situation and weighed the options. It had been snowing all day, but as we climbed higher and higher, the snow was starting to stick more and more. If it kept getting worse, down-climbing these sections could be really sketchy. After some soul-searching, we decided to turn back, even though we were so close to the top -- it was right there!

Where we decided to turn back.

On the way back down, we popped over and checked out the Eminence Break side canyon, though only from above. On our last trip, we had some canyoneers that really wanted to explore it, but there wasn't room in the schedule for it. However, I would definitely make room for this next time -- it looks pretty awesome. 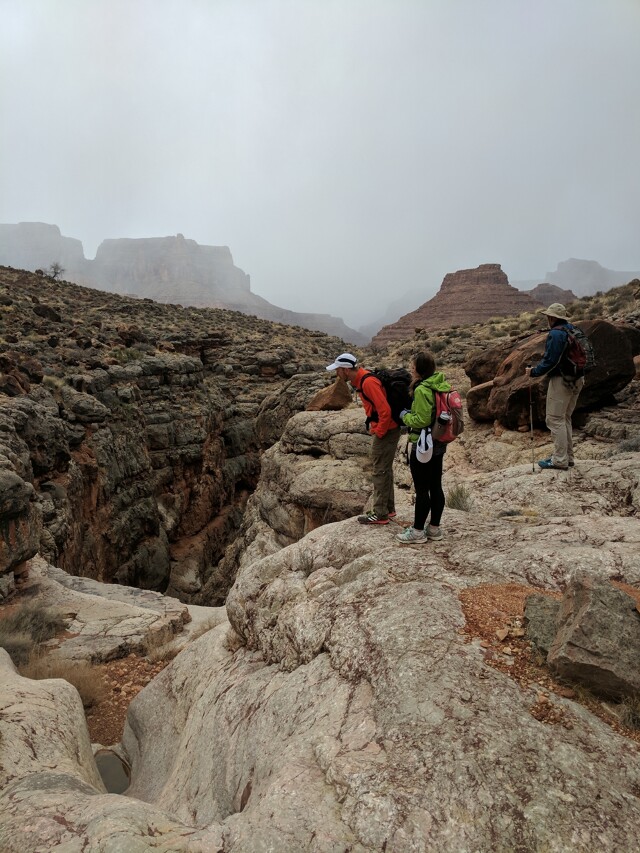 Nick peering down into the abyss.

Terrible night last night -- windy, sand everywhere. Started raining at like 5am Got up at 6:30 or so, had some breakfast (pancakes) Started the rim attempt with Nick and Amanda Rain turned to sleet about halfway up, right where the trail got kind of dicey. Decided to turn back. Reached camp at noon; had our packed lunches Moved my tent from the bluff to the woods Took a nap until 4:15pm Had dinner (chicken and cornbread) Then the weather turned again and the cold rolled in Once it started snowing, I just gave up and went to my tent to get warm and maybe actually get some sleep tonight. 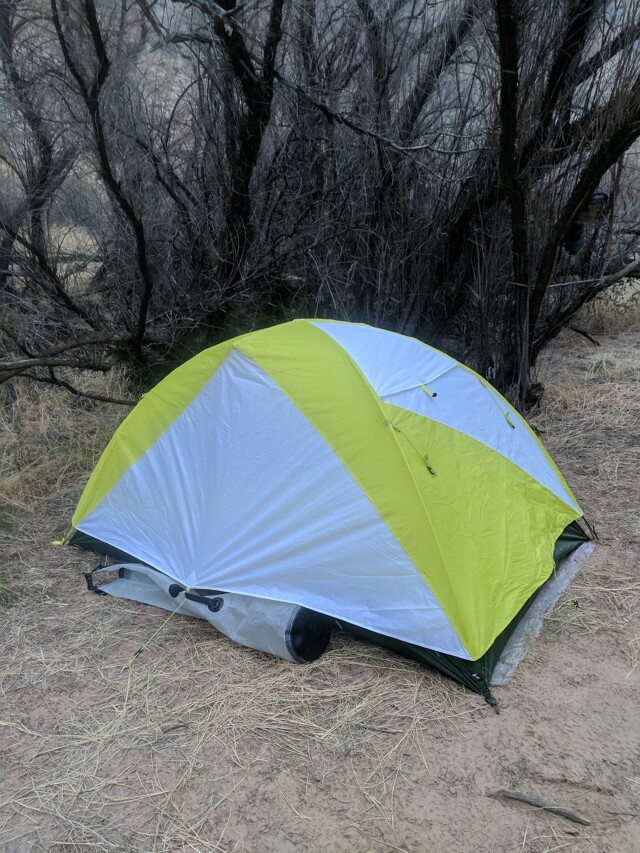 Once back at camp, I relocated my tent from the exposed beach to a thicket of shrubs -- if the wind kicks up again tonight, it'll be some sort of cover. I hope.

I also put all of my extra bags near the bottom of my rain fly to stop the sand-laden wind from entering. I hope.

Oh, and we looked it up when we got back to camp: we were maybe halfway to the rim. If that.